Sunday morning was pleasant as we loaded our gear and left town about 8 AM).

Our gas stops were in Columbus, Hardin, Sheridan, Gillette and Spearfish. That probably seems like a lot of stops for 500 miles, but we were playing it safe and guessing our way at gas stops, plus 75-100 miles was about the furthest our butts could stand. 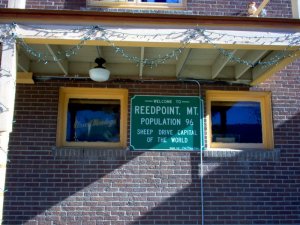 We tried to gas up in Reed Pt., MT but it was almost a ghost town. As we drove through, the only living thing was a dog laying in the street. He didn’t even raise his head as we passed by him not 10′ away. He finally raised his head on our second pass. There is no gas station in Reed Pt. No vacancies in the motel either.

The speed limit was 75 mph on I-90 but we tended to push it. Most of the day was spent watching the scenery fly by at 80 and sometimes peaking at 95. During each gas stop Tom and I would be thankful we’d survived the last leg and swore to keep the speed down, but, next thing we knew, Aaron had us flying again. 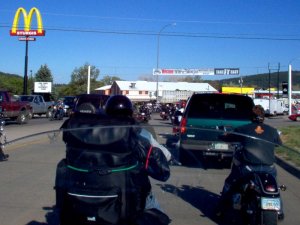 A friend had predicted that arriving in Sturgis would be like ants streaming to their ant hill.  As we approached, each gas stop had greater numbers of bikes and riders. Within 100 miles of Sturgis the freeway was pretty much a continuous double line of bikes stretching to the horizon like a giant biker club from an old “B” biker flic. We could see bikes coming off the low rolling hills, driving along the freeway frontage roads and every on ramp brought new members to the club.

We hit Sturgis at 1700 Sunday afternoon.