We traveled from Puerto Inka to Nazca via the Pan American Highway. In Nazca most of us signed up for an airplane tour over the Nazca Lines and Geoglyphs. Flying in third world countries makes me nervous.

Before leaving for Nazca the following morning several of us hiked the hills on the ocean side of the resort to view the coast and the local Inka ruins. It was another beautiful day with a clear sky. Since we only had about 100 miles to ride to Nazca, our destination that day, we took our time and made it a leisurely walk. 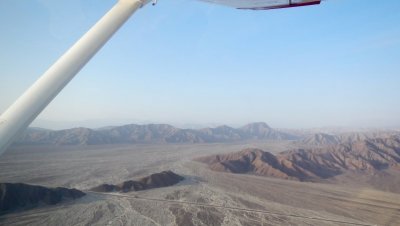 The small town of Nazca (about 40,000 pop.) lies on the Pan American Highway north of Puerto Inka at its junction with PE-26A (Google Maps, 2016). The ride was largely through the arid desert (again). Nazca province is one of the most arid regions in the world with an average annual precipitation of 4 mm. There are a few small villages and towns along the way where a stream or river flows through a valley. For the most part though, it is a bleak landscape.

Nazca is known for the 1996 earth quake which nearly destroyed the entire city, but it is best known for the ancient lines and geoglyphs nearby (both are commonly referred to as the “Nazca Lines”)

There has been a persistent myth that the area was a landing strip for ancient aliens. That has been well debunked. That leaves the question, “What could be the ancient Nazcan people’s purpose for creating the lines which could only be seen from nearby mountains or the skies?” Simply, their gods. In fact, the geoglyphs are common designs on their pottery as well. (Wikipedia, 2016)

You can view the lines from a platform on the Pan American Highway northwest of Nazca, but the view is poor. Most of us chose to take the hotel shuttle to the nearby airport for a flight over the lines. 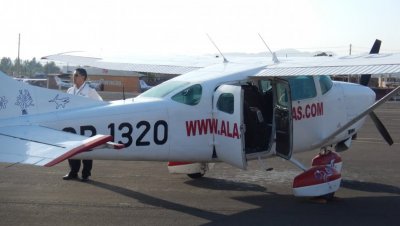 The airport is small but busy with a horde of tourists taking tour flights. The representatives were quick and effecient. We had our tickets and in the waiting area within a half hour of arrival.

I had one reoccuring question as we waited, “How well are the aircraft maintained and how well are the pilots trained” When our turn came I could see the aircraft looked fairly new as we approached the loading zone. The pilot and guide also looked professional, but on the first attempt at starting the engine it coughed and died. I was becoming more apprehensive, however the second try was successful. The flight itself turned out to be safe and fun.

We had a pilot and copilot. The copilot acted as our guide. As we flew into the desert northwest of Nazca the pilot would turn the plane so that the wing would be slightly above a glyph as we passed. The guide would tell us what we were seeing as we approached. After passing the glyph the pilot would do a 180 turn. He would then return to the view and repeat the process for the opposite side of the plane.

After about 45 minutes we landed safely and returned to the hotel for dinner and a short walk to the market.