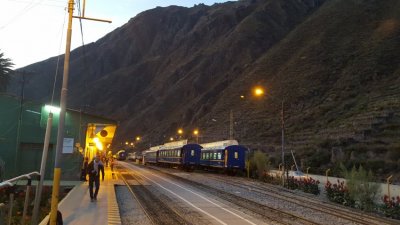 The route to Machu Picchu is not straight forward. For us, it involved motorcycle, train and bus rides. We rode to Ollantaytambo via motorcycles. The next morning we took the 0630 shuttle train to Aquas Calientes (about 1.5 hours). There we took the shuttle bus up to Machu Picchu (about 30 minutes).

The train ride was comfortable and scenic. The “Road of Death,” not so much.

The Road of Death 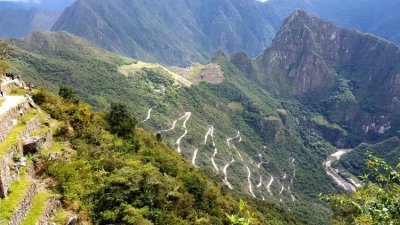 The bus ride was scenic but couldn’t be called comfortable. Several videos I found on line called the route from Aquas Calientes to Machu Picchu “The Road of Death.” It is a twisty, narrow and rough road of gravel and dirt with few (if any) guard rails. The title may be misleading. I could not find any documentation of recent deaths, however after the ride up, I understood the feeling of that title.

It is hair raising at times. The buses travel at uncomfortable speeds and frequently decelerate to a quick stop for on coming buses: often times having to back up to a turn out. There are also several places where the bus is very close to the edge of a long way down while traveling lickety-split to and from the ruins. Here’s a Youtube video which shows the bus ride.  It’s one of the best I found online which shows the steep drop offs and speed of the buses.

You can also walk up to and down from the ruins. Here’s a link with Google map and info. It looked to be a hellish climb up. With my knees, it would be the same going down.

After our guided tour of the ruins several of the group hiked a couple of the trails above Machu Picchu. Four of us walked to the Sun Gate which is described as a moderate hike. A few others to the more difficult Mountain trail which is longer with many steps. At least one person turned back in that group.

As for the four of us who walked to the Sun Gate, Slade and Gerry were younger. Emanuel and I had a few years on them so they scooted out ahead. Emanuel and I took our time and stopped often for breaks. At 7,972 ft of altitude it’s not like a strenuous hike at sea level or even the Cascades in Washington. Then add nearly another thousand getting to the Sun Gate.

As we progressed up the trail, those coming down would often give encouragement with “It’s not bad, you’re half way.” “Keep going, you’re about three fourths of the way.” “Almost there!” “Another hundred yards or so!” After each of these Emanuel thanked them for the encouragement.

On the way back down and nearing the bottom of the trail we saw a girl who had just finished the first of many switchbacks. She was a bit stressed and huffing and puffing. Emanuel said to her, “You’ve got a long way to go!” Instead of encouragement Emanuel gave her a sample of his wry humor.

The hike was difficult and probably took us an hour and a half to go up and down plus the half hour breather and picture taking at the Sun Gate. The view was definitely worth the effort.