You are here: Home » 2016 Fall Motorcycle Ride to Heber 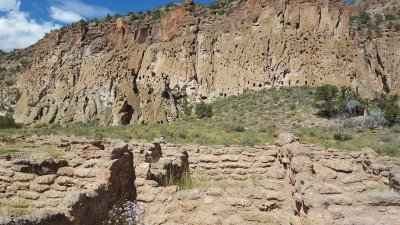 After visiting the Classical Gas Museum in Embudo, NM we continued our two day ride to Heber via White Rock, NM on NM-68/502/4. We largely followed the Rio Grande River. We would visit Bandelier National Monument, Sante Fe’s Palace of the Governors, the NROA Very Large Array near Socorro, NM and Pie Town, NM.

In White Rock we purchased tickets to Bandelier NM and caught the Shuttle (now required between 0900 and 1500) to the visitor center (about 20 minutes). Although Steve and I had visited Bandelier before, we had two goals: 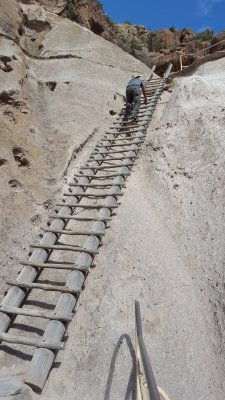 Steve read from the Official Bandelier guide book as we walked the first half of the loop trail. It was a good refresher for us. Once we got to the base of the Alcove House we discovered that the ladders were solid and well built so scaling them was fairly easy. It was a good feeling getting to the top where we discovered a breathtaking view and a bit of its history.

The Alcove House (aka Ceremonial Cave) was discovered in 1908 and reconstructed in 1910. It was used by puebloan people in the Frijoles Canyon from approximately 1150-1600, housing up to 25 families.

After the Alcove house we hiked the .5 miles back to the main loop trail. From there we followed the .5 mile nature path back to the visitor center. We then took time to watch the short video of Bandelier NM at the center before catching the shuttle back to our bikes.

After Bandelier we stopped for dinner at Gabriel’s restaurant on the way to Santa Fe. Although Gabriel’s came highly recommended, it appeared to be a run down shack according to Google Map. 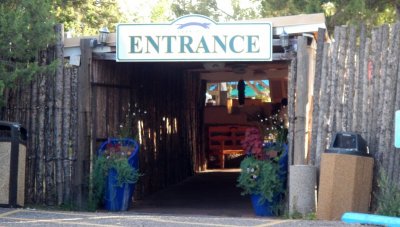 On arrival, we happily discovered it’s an excellent restaurant on the outskirts of Santa Fe. The outside belies the comfortable and up-scale accommodations inside. Gabriel’s provides great service and an excellent menu of Mexican food.

Our plan was to camp at the KOA in Sana Fe. The sun was setting as we approached Santa Fe. It was dark by the time we we reached the KOA. As we rode in thunder and lightening was active just over the hills from us. It started to sprinkle as we setup camp. It became a down pour as we slept. At one point we were all awakened to a tremendous thunderclap over our heads which felt like it bounced us off the ground. I came out of a deep sleep thinking I was back on the ship in Vietnam and that we had been hit.

We generally survived the night without damage although Steve’s old tent leaked like a sieve and got his clothes and riding gear wet. After showering and drying tents and rain flys Steve recommended we visit the Palace of the Governors at the plaza.

On the way we stopped at Harry’s Roadhouse Cafe (of Food Network fame) for breakfast. It’s a quirky little place. It’s also a favorite with locals and tourists with a creative menu of great food. 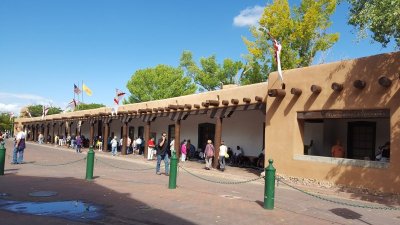 Steve once described the area surrounding the plaza is a little “Hoity-toity.” It was, though the palace itself was full of southwestern history. I enjoyed reading more regarding the Pueblo Revolt. Although adeptly described by Ramon, our guide at the Taos Pueblo, the palace provided photos and more detail.

Outside you have the opportunity to purchase Native American crafts. Steve and I both purchased stone polished pottery from Laverne Loretto-Tosa. All the crafts people were friendly, but she was especially so. She even shared photos of her grandson making clay pots and the firing process.

Steve found a jewelry artist and looking at his money clips. They had several Harley Davidson money clips. Steve commented to the guy, “They look good but you should make Native American stuff.” The artist responded with a rye smile, “It is Native American.” We both caught on and laughed. Steve bought a couple of money clips and they shook hands. As we started to walk away Steve said to the seller, “You didn’t shake my buddy’s hand.” The artist sardonically responded with, “He didn’t buy anything.” We laughed again.

The night before left on this trip my step-son told me we needed to visit Madrid in New Mexico. It’s an old mining town and he highly recommended the burgers at Mine Shaft Tavern. 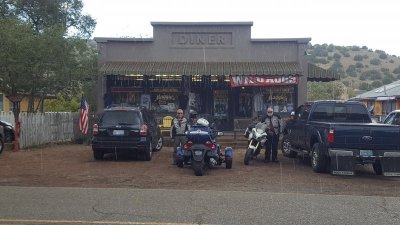 Madrid sounded familiar so I looked it up on the web and discovered it’s the town where the Del Fuegos caught up with the Wild Hogs in the movie Wild Hogs. I added it to the itinerary on the ride to Heber portion of the trip..

So, our way to Albuquerque we took NM-14 to Madrid. We visited Mollie’s Cafe from the movie (which is souvenir shop and ate at the Mine Shaft Tavern. The hatch chili burger was excellent.

We spent the night at the KOA in Albuquerque with dinner at Sadie’s. Sadie’s is another great place for Mexican food.

From Albuquerque we headed south to Socorro. We then took a right on US-60 to the National Radio Astronomy Observatory (NRAO) Very Large Array (VLA). These are the antennas seen in the 1997 movie Contact and Carl Sagan’s 1980 documentary, Cosmos. 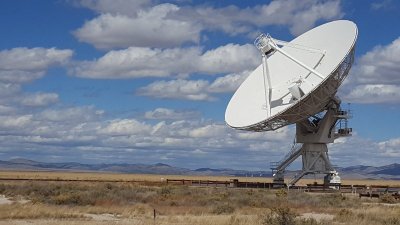 I had visited the site before, but Tom and Steve had not. It is a worth while stop/ It only takes about an hour to watch the video, view the displays and do a self tour. The video shows how the array is focused and the 82 foot diameter/280 ton antennas are moved and how the VLA is used. It’s an amazing place.

We did the self guided tour. Of particular interest was the Jack of Diamonds, an up close visit to an antenna and a view from the balcony of the main building for a view of the complete array.

I had visited the Pie Lady (Kathy Knapp) at Pie-o-neer Cafe in Pie Town the previous year. I decided our ride to Heber should include the home made Pies found at here. Plus everyone is friendly and it’s a heart (and taste bud) warming stop. 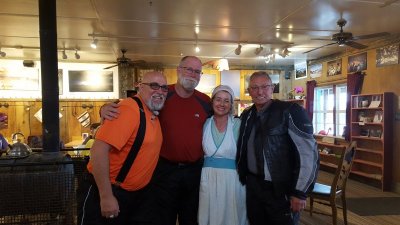 The most interesting part of a visit though, is talking with the Pie Lady. We requested she come to our table for a photo, which she did. She then spent a half hour with us telling the history of Pie Town and her mother’s migration from Texas to Pie Town. At the time, no one was making pies in Pie town. Her mother insisted they purchase one of the cafes and start. Check out their web page for videos and history.

We had planned to meet friends, Andy and Cayla, at Hannagan Meadow Lodge on US-191 (The Devil’s Highway). When Steve called to reserve rooms he was told a wedding party had taken all but one room. So, I called Andy and he suggested we meet at  friends Don and Judy’s cabin in Heber that night. Then, the next morning, ride together to Scottsdale on US-60 through Salt River Canyon.

We met at the Red Onion Lounge where we had dinner and drinks. It was late so we quickly adjourned to Don and Judy’s cabin in the woods above Heber. It’s a great cabin. Although it was cold outside we were warm and toasty inside by the gas fire place. No tents that night.