You are here: Home » Local and Northwest » 11 Oregon BCDR 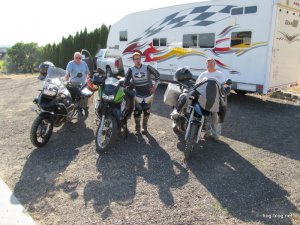 The Oregon Backcountry Discovery Route comes in many flavors (routes). The significant point of the route(s) is that you stay off paved roads as much as possible traveling from the Washington-Oregon border  to the Oregon-California border (or vice versa).

George pulled Andy’s toy hauler, picked up supplies each day and met us at our designated camping spot. I doubt many riders of the OBCDR had it this good. I am not bragging and admire those that camped the whole way. We did, however have a much easier trip because of it. We had food, beverage, music and bunks waiting for us at the end of each day.

We chose moderate routes for our trip and planned the trip for two separate rides of 4-5 day lengths. The moderate routes turned out to be largely easy riding with excellent views, but could dump some of us on our asses when we least expected it. The two rides was due to one of our members not having two weeks of time off and could only get a few days off at a stretch.

We did reach the California border from the Washington border, but we missed some of the route due to time constraints.