You are here: Home » Local and Northwest Rides » 15 Puget Sound

I posted days 3-6 photos under the Local and Northwest menu. 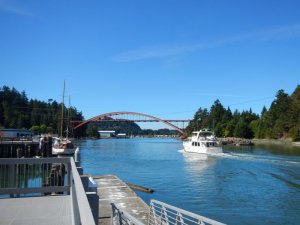 After leaving San Juan Island I spent the night in Marysville at Riverbend Campground. The next day I rode to La Conner and had breakfast at The Calico Cupboard Old Time Café on the Swinomish Channel. It started another great day. The sun was out, I had a nice view from the back patio of the channel with boats passing by and the food was good.

Then it was across Deception Pass and down to Oak Harbor for an overnight visit with Terry and Pat, my ex-CO and his wife. Terry BBQ’d giant steaks for us on the balcony overlooking Oak Harbor and the sound. 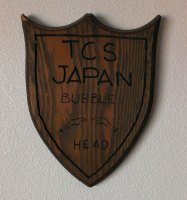 We always talk about the old times after catching up with the latest in each other’s lives. One of the stories which invariably comes up is in regards to the plaque I had a student make as a joke for his going away party put on by the reserve unit when he moved to the east coast. I told the kid, “If it’s good, you get an F. If it’s bad, you get an A.” Terry still displays it proudly and counts it as one of his most prized memorabilia on his “I love me” wall. Note: We also got Terry a nice statuette of a pair of dolphins for a legit going away present (He keeps this on his 44′ Sloop, Sunnyside).

The following day Terry took me for a tour of the Naval Air Station. We were both stationed there in the early ’70s but never met. We finally met many years later at the Pasco Reserve Center. He became my unit’s Commanding Officer and eventually made me his Executive Officer (as an RM2!)

After the tour Terry led me to Toby’s Tavern in Coupeville where we had chowder and beer before I headed to Keystone where I caught the Port Townsend-Coupeville ferry. 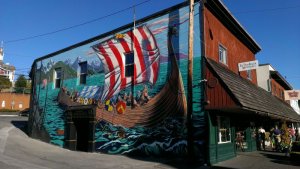 After disembarking in Port Townsend I continued to Poulsbo where I connected with Bruce, an old friend I worked and palled around with when we were both employed at Airborne Freight in downtown Seattle. His apartment is only a couple of blocks off the water and downtown so we walked in that direction while sharing our histories since the we had last met. Before we reached downtown, Bruce suggested we stop at Valholl Brewing which had live music. We spent an hour or so there listening to the music and talking in between songs.

Budget motels were  scarce in Poulsbo so that night Bruce offered me the use of his couch (better than a tent!). The next morning was a beautiful-sunny day so we walked around town; first having coffee then lunch at the Jalisco Restaurant (Mexican). Later we continued our stroll around town and along the water front. We finished the evening at Bruce’s watching a movie after first, and most importantly, picking up some Lefse for tomorrow’s breakfast.

After coffee and lefse the next morning I headed home. It was raining but I had a great time the previous few days. My time on San Juan Island, at Terry & Pat’s and Bruce’s were enjoyably relaxing. 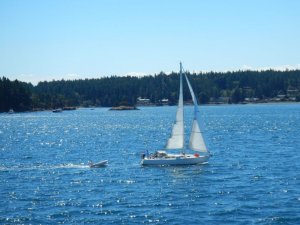 I finished the photo galleries (all photos) and video for the Puget Sound ride last August for Days 1-2. You will find them on my blog under Local and Northwest.

I rode across Snoqualmie Pass and up I-5 to Marysville. As I passed through Marysville I discovered I had an electrical short, but couldn’t find it. Fortunately, Widow Maker Customs was not far. They got me right in, solved the problem and sent me on my way at a fair price.

I spent the night at Riverbend Campground in Mt. Vernon. It’s a great place with a Wally World across the street for cheap food and fluids. It’s right on the Skagit River so you can crawl up the dike for a great view. The managers are good folks and they provide showers, washer dryers and a small but comfortable room with chairs and TV. A very reasonable price per tent also.

The next morning it was cold and overcast. I thought about canceling the ferry ride to the islands, but thought I would do some maintenance on the bike before I decided to see if the weather cleared. I rode to Anacortes and had coffee then tinkered with the bike. My GPS plug was jerry rigged so straitened that out as much as I could. Also discovered my odometer reset button was loose so tightened that.

By the time I had finished, the sun was coming out so I rode to the ferry. I got there just in time and my place at the front of the line (motorcycles go on after pedestrians). The ferry ride is always enjoyable passing through the small islands and peninsulas of the mainland plus I had a blue sky with some clouds and blue water. 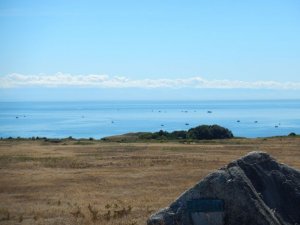 It was a 20 minutes to ride from Friday Harbor, San Juan Island to the southern tip of the island where I visited San Juan National Historic Site – American Camp. American Camp was where the American had a settlement in the 1800s. The English had one further north on the island.

I took a hiking tour provided by the rangers there. We visited the American Camp and other related sites where the Pig War almost occurred. We then walked to a lookout where we could see the sport and commercial fishing boats, whale watching tour boats, and a few Orca whales which, at our distance, looked like black dots swimming near the boats. The ranger informed us that where you find the salmon you will also find the fishing boats, tour boats and Orcas. 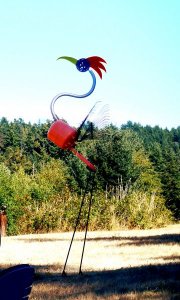 After the tour I rode up the western coast of the island past Lime Kiln Point State Park, San Juan County Park and on to Roche Harbor. There are some great views along the road. I would like to go back and camp for a night to catch the sunset at one of the parks. Roche Harbor is a wealthy person’s enclave with motor and sail yachts, expensive food, and insanely expensive hotels. The Sculpture Park was free so I got photos of that 🙂

It was getting late so I headed back to Friday Harbor and back to the mainland where I stayed at the Riverbend Campground a second night.