You are here: Home » Devil's Tower

Thursday morning we completed packing, checked our loads then drove out of Buffalo Chip at 0800.  Traffic was light through town that early in the day.  I took the lead onto the freeway and we planned our first gas stop for Spearfish.  From Spearfish Tom took the lead and we drove back roads to Devil’s Tower.  We stopped in Hulett where a community group was offering breakfast to bikers and the streets of this little town were lined with bikes. 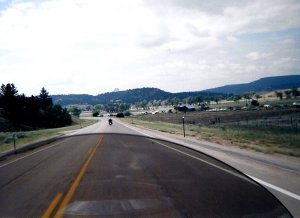 After Hulett we continued into the hills away from I-90 toward Devil’s Tower. I caught an interesting photo of it in the distance from the road. You can see it just peaking over the hills from the horizon.

Devil’s Tower is something of an enigma. It’s hard to fathom. When you look at it from the parking area it’s not very impressive. This is due to a lack of perspective. Although it rises up out of the earth over 1200′, it has nothing around it for comparison. If you look close, though you can see little black specs moving on it. The specks are people climbing Devil’s Tower and these give you the perspective you need to be impressed. More info on Devil’s Tower 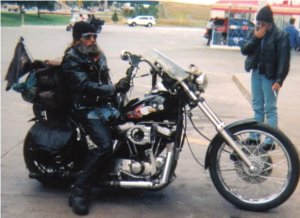 We stopped for gas in Gillette, Wyoming. A biker parked a few spaces from us and just sat on his bike.  He was a small older fellow riding an old, Low Rider. Aaron walked over and asked if he could take the guy’s picture. At first he just looked at Aaron like, “What in hell do you want?!?” Then it dawned on him that all Aaron wanted was a picture so he slowly straightened up and gave a half smile.

It turns out he was  70 years old.  Having just left Sturgis he was returning to New Mexico.  The day before, while riding twisty roads, his foot peg caught the pavement and flipped the bike on top of him.  He had three broken ribs and was in obvious pain. Slowly he got off the bike to take a break and could barley get his leg over the already low seat.  Of all the people we had seen and met on our Sturgis trip, this guy was the epitome of a real biker.

“Instead of a cell phone,
he carries a knife,
no helmet,  no ear plugs,
his leathers don’t shine” 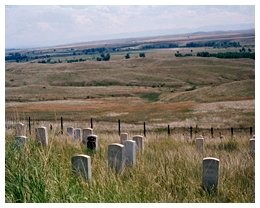 Our second stop of the day was at Little Big Horn Battlefield Nation Monument which is located about 50 miles SE of Billings, MT.  We toured the museum for over an hour and looked out over the battlefield. As I think back on it, this riding day was probably the most event filled. The old biker, Devil’s Tower, Little Big Horn, and more was to come.

Later we ran into two groups of banditos. They didn’t give us any attitude but neither were they warm and friendly. One of the encounters occurred when Tom accidently got suntan lotion in his eyes causing his eyes to burn. The wind had also peeled a couple layers off his eyeballs due to his 3/4 helmet. We pulled off the freeway into a gas station so Tom could use my duct tape in an attempt to extend his visor and keep the wind out of his eyes. The duct tape was fluorescent orange, but Tom was glad to have it until one of the groups of Banditos pulled in and began watching him. They were shaking their heads and saying stuff like, “No need to worry about being seen.” I think they were being sarcastic.

I moved away from Tom and shook my head like I was as disgusted as they were.

This was our longest riding day, 14+ hours, due to our tourista stops. We didn’t hit the mountains before Bozeman until night fall and it got cold. We were being bombarded by night birds and there were several close calls until Aaron finally center punched one. I was riding behind him and watched the bird fly straight up into the air after impact and disappear into the cold night. Word must have gotten out because after that there were no more close calls.

It was about this time I began hearing an engine noise. It had started earlier but got louder about a hundred miles out of Bozeman. Wonderful. Tom’s blind, Aaron’s on edge after the bird incident, and I’m wondering if my bike will make it to Bozeman let alone home. Bozeman was a welcome site.