You are here: Home » Sonny 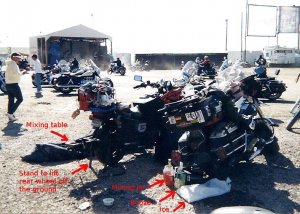 Wednesday morning was cool but sunny and began to warm quickly.  Tom and I drove to the amphitheater and parked near the food vendors.  I pointed to two motorcycles parked near ours. Both were “Rat Bikes”, however, one was much further along in its quest for rat bike status.

Next to the bikes were two sleeping bags with, presumably, a human in each.  Garments were strewn about the make-shift camp including one boot haphazardly lying near one of the bodies. What ever they were, they were sleeping on the gravel in the parking area and obviously not bothered by the noise of bikes driving past and spectators gawking at them.

The “rat” bikes deserved their names if dirty, rusty, and loaded with junk is a requirement. One had a custom gas tank welded from sheet metal into a box shape. Other custom features included 1×3 pieces of wood wired to the frame for floorboards and a device cleverly mounted to the back wheel to run a blender.  Behind the bikes were two 1/2 gallon containers of whiskey and an open jug mostly full of some concoction ready for consumption upon the owner’s waking. We wondered if he would be upset by the flies floating on top. Considering the scene…probably not . 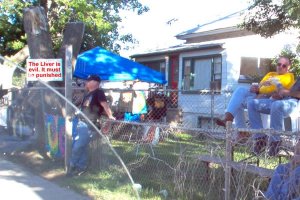 Later we headed into town for a last walk through downtown Sturgis. We usually parked out bikes in the city park on the closest side of town. We would then walk the mile or so to downtown. Along the way were many locals or renters sitting in their yards watching the show on Lazelle St., the main drag through town. Each walk was accompanied by something new or interesting including signs promoting all kinds of bad behavior. “The liver is evil. It must be punished!” 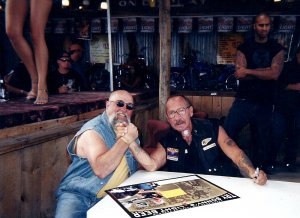 A highlight of our day was meeting Sonny Barger.  Sonny is known for his role as Oakland Chapter President of the Hell’s Angels MC.  Now, in his early 70s, he still commands respect. Other bikers treated him like the Godfather of bikers, almost kowtowing to him. The Broken Spoke set up his table with dancers on a bar above him and bouncer types near by. When I finally got to meet Sonny, I considered asking him if he would like to join the Bad Teacher RC, then thought better of it.