You are here: Home » We Ride to Mother Earth

Our riding adventure began with a ride from Arequipa to Majes River Resort in the Colca Canyon. Mother Earth awaited us.

The first leg of our riding was through desert to the Pan American Highway on the pacific coast of Peru. We rode 71 miles of mostly barren desert to Mollendo. I mean barren as in no animals, plants, and only a few people and dilapidated structures. At the coast  we dropped down onto the Pan American Highway (PAH). The Pacific Ocean blue and white crested breakers were a welcome contrast to the bleakness of the desert. Mother Earth is diverse.

At the Welcome Dinner in Arequipa, Ben our guide gave us some pointers for riding motorcycles in Peru. He told us the signs, speed limits and other traffic directions were largely “suggestions.” So, on our ride to the coast from Arequipa we maintained a healthy speed of 60-80 mph. Once at the coast, we rode the PAH at speeds of 80-100 mph for 54 miles to our turn at highway 1S. There we turned east and back into the desert. It was another bleak section but kept interesting by the speeds we maintained and dodging sand drifts.

Entry to Colca Canyon is more like a drop0 off. From a great view point at the edge of the canyon we dropped several hundred meters down a steep-twisting road to the green valley below.

At the bottom of the decline we stopped in Corire for lunch and our first hiccup of the trip. We waited for our lunch with the patience of Job for three hours. It actually was not a bad wait as it turned out to be a good opportunity for the riders to get to know each other.

After the protracted lunch break we continued east up the valley for 34 miles to Majes River Lodge. It was a pleasant ride following the Majes River with views of the farms to our right and canyon walls above us. It was not only more enjoyable due to the views, but also as a result of our slower speeds. There was more traffic, people and farm animals.

Upon reaching the lodge we were immediately charmed by the proprietor, Julio. He was absolutely friendly, helping us get checked in and settled into our bungalows.

For the afternoon, some of us did an “extra credit” ride further into and up the canyon on two track gravel while the others enjoyed a tour of the grounds by Julio.

For those of us who did the extra ride, Julio gave a shortened tour of his small church, museum, winery, and pisco distillery. Julio is a character and, it turned out, one of the highlights of the entire trip for me. Affable and proud of his country, the tour was a treat. 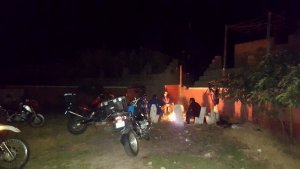 Several of us ended the night in the old bull ring behind the lodge sitting on stumps around a campfire under the southern cross and a black sky full of stars, the southern cross constellation and many unfamiliar constellations. We passed a bottle of pisco around the campfire while Julio shared more of the history, culture and the religions of the area.

Julio ended his story telling by downing half a shot of pisco then tossing the rest into the fire. The fire raged while he proclaimed, “A la tierra madre!” (To mother earth!).

I will never forget the evening I spent with Julio. He has to be the most interesting man in Majes (and maybe Peru). 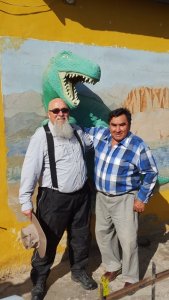