You are here: Home » 2016 Peru: Funny Things Happened on the Way to Puno

Crazy, fun, not so fun and interesting are good adjectives for experiences in store for us on our way to and in Puno. These included the crazy town of Juliaca, having a reason to say “Lake Titicaca”, dealing with altitude sickness, and visiting the unique floating islands of the Uros people.

We were warned by other motorcycle riders about the craziness in the city of Juliaca. They couldn’t quite explain why it was crazy other than the road and traffic were wild.

I did a little research and discovered that Juliaca is in one of the poorest regions of Peru with a thriving organized-crime industry, drug trafficking, and significant violent crime. 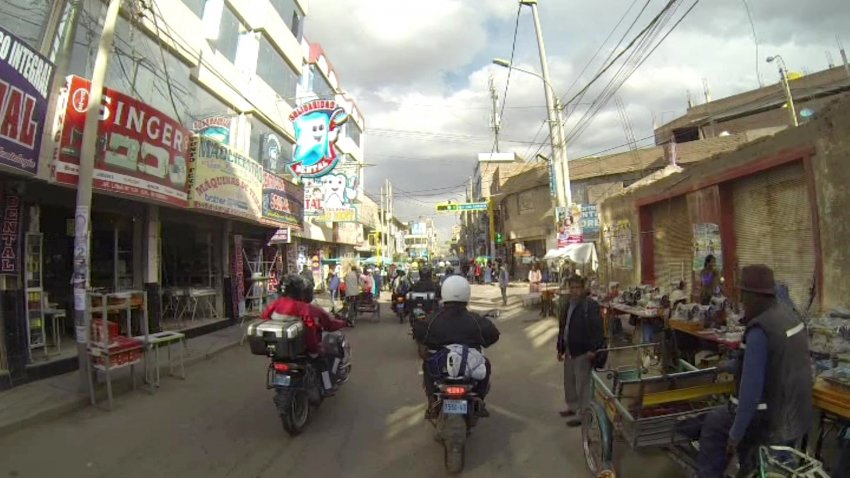 The road into town is standard asphalt, but quickly turns to dirt. About the same time traffic gets crazy. Trucks, cars, three wheelers, motorcycles, bicycles and pedestrians chaotically meander around each other. Adding to the chaos there are few signs, lights, or lane indicators.

At times there were only inches between the vehicle in front, the vehicles on either side and anything behind you. On top of that you often have to dodge a vehicle cutting in front of you, a giant pot hole and a pedestrian at the same time.

I had several mood swings traveling through Juliaca. One moment I would be fearful of getting left behind in the vehicular chaos. The next, I would be laughing at the traffic moving in all directions. A split second later I would be panicked when confronted with several objects to avoid at the same time and little room to move.

I can confirm what others have suggested; Juliaca IS CRAZY to drive through.

Here’s a link to the Peru video gallery. There you will find the Juliaca Video of our group riding through town. The video was provided by Slade, one of the riders, taken with his GoPro. I’ve edited it down to ~8 minutes and added background sound and captions.

Here’s a quote I found online written by WheelieDreams at Horizonunlimited.com. It’s a thread regarding how to avoid riding through Juliaca.

“Went through Juliaca twice about six months ago.

A funny story about that. I had a

or two with a Swiss rtw rider, on an HP2 as well, in Medellin. I had my big SA map out asking him for his best tips. I’d just arrived in SA. One of the first things he did was grab a pen and circle Juliaca and label it ‘shithole’. It was the only negative he had for me on the whole map. It’s that bad.

But I enjoyed riding through it. Yes it’s a scary and dangerous place but worth seeing for those reasons. Just don’t stop and there’s no problem.” 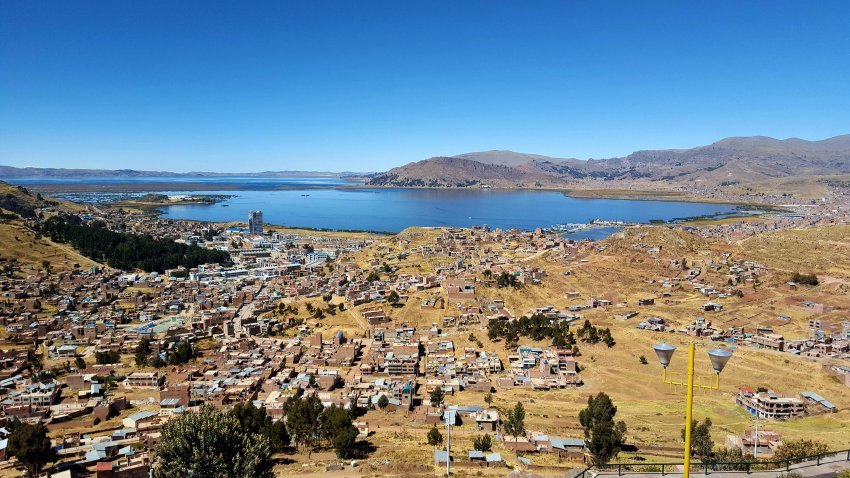 A few of us had fun saying the word “Titicaca” on our way to Puno where the lake is located. Our fun was certainly juvenile, but Rodney challenged us to say Lake Titicaca as many times as we could in a complete sentence. He got us to three Titicacas before we stopped. I think the piscos took us off our game. Regardless, Lake Titicaca is a beautiful lake. (I just used “Titicaca” four, now five times in one paragraph!)

Not so Fun – Altitude Sickness

Puno has an elevation of 12,500′. Although we had been at 15,000′ several times previously; this would be our first overnight at this elevation. Travelers in Arequipa had warned us of serious side effects of altitude sickness that can occur in Puno. If you go, take precautions.

As mentioned in a previous post, I was chewing coca leaves and coca candy often. This seemed to help at the previously. The coca will not work over night because you can’t use them while sleeping. Due to this I awoke several times during the night feeling like I was suffocating.

It was definitely scary the first time. I awoke panicked and feeling like I was out of air. It took several deep breaths to relieve the feeling and eventually get back to sleep. I would, however, awake several times during the night needing more deep breaths. Getting a good night’s sleep was a problem. Fortunately I did not suffer any other altitude sickness symptoms.

Altitude sickness can happen to anyone regardless of age or physical condition. Symptoms can include any of the following; headache, nausea, dizziness, loss of appetite and several more serious maladies. These are usually worse at night: probably due to shallow breathing which decreases oxygen/carbon dioxide transfer in the lungs.

If you get to Puno, take the floating islands tour. It was fun and interesting. The boat will drop you off on one of the forty some islands made out of reeds. You are greeted by song and waving from the family which lives on the island and who provide the activities. These included a tour of their homes, entertainment, demonstrations and dressing us in traditional garb for photos. 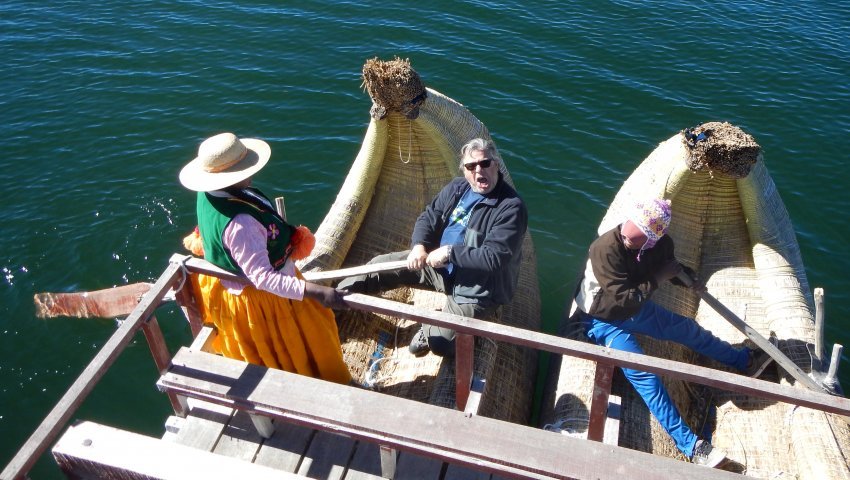 The tour was informative through demonstrations of their subsistence life style, fishing/hunting methods and tool making. For a few sol more you can take a ride in one of their reed boats. They will even allow you to do the rowing if you are inclined. Ben and Rodney were.

I highly recommend the tour. I enjoyed it. You can see and read more about the tour in the photo gallery linked below.